Last time I wrote about bokeh I was referring to out-of-focus backgrounds, so prevalent in interviews we shoot today. But bokeh just ain’t for backgrounds. Foreground bokeh is also visually pleasing. 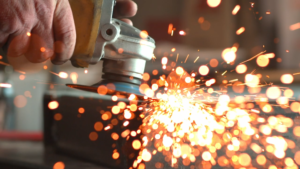 In this frame I shot a grinding wheel on a piece of metal. I used a 90mm lens, overcranked the camera, and asked the grinding wheel operator to direct the sparks towards the lens (after placing an optical flat in my matte box to protect the lens front element, naturally). As the sparks came closer to the lens they went out of focus. You can see how this looks in the intro video on my homepage. In this way, I created foreground bokeh.

So how about if you’re not shooting a grinding wheel? Can foreground bokeh be used in a more common setup, like an interview?

Absolutely. In fact, foreground bokeh for interviews has been around a long time. You may see it in a ‘dirty’ interview shot, the word ‘dirty’ meaning that a part of the person being spoken to is visible, and out of focus, on the edge of frame: 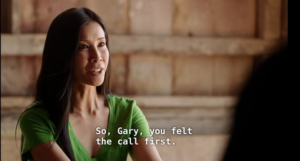 (By the way, a ‘clean’ image would not have any reference to the person being spoken to.)

Another way of using foreground bokeh in an interview is to frame some of the environment where the interview takes place in the foreground, like this still from an interview with Rick Hall from the movie “Muscle Shoals” shot by Anthony Arendt:

There’s a lot to like in the framing: I see three separate planes of focus, the far background, the subject, and the close foreground, which gives a sense of depth. Also notice how the foreground creates a screen division, a diagonal going from upper left to lower right.

The idea here is to introduce some element of the place where you’re shooting, in order to give a context. Another example would be to shoot a lab technician with out-of-focus glass beakers on the bottom edge of frame.

Bokeh is another tool in our visual toolbox to create depth and interest in the frame. Hey, just because you’re filming an interview you can still create visual interest.