On a Saturday morning on August 3rd I looked out my window and saw the Austrian Alps.  Or at least part of them --  heavy clouds were drifting past the peaks so fast it looked like time-lapse.  Very soon I’d be up there.

The plan was for our video crew to hike 2 ½ hours up the side of a mountain.  We headed to a 6000 foot elevation where, 75 years ago to the day, the German Luftwaffe shot down an American B24 Liberator after it completed its bombing run in Germany.

The B24 was named Sugar Baby and the hike up the mountain was part of a new documentary produced by Holly Stadtler called The Green Box: At the Heart of a Purple Heart.  For this part of the project our crew followed Jim Kurtz, the son of the Sugar Baby’s co-pilot Robert Kurtz.  Robert was newly married with a baby boy when he enlisted.  And just before he went overseas he took two of his son’s pink baby slippers, gave one to his wife, and told her he’d keep the other until they were reunited.

The trek up to the crash site was Jim’s way of getting to know who his father was and what he'd gone through.  The site itself is barren and rocky with only mountain goats for company.  Wreckage from the Sugar Baby is strewn all over the site.  But on a previous journey Jim and other adult children of Sugar Baby’s crew collected some of the plane wreckage to build a small shrine in memory of the men who survived -- and the less fortunate who didn’t.  Robert Kurtz survived the crash and the POW camp.  He was one of the lucky ones to survive the war, but the physical hard ships and starvation took their toll.  He lived only ten more years. When Robert Kurtz died, his son Jim was only two.  Jim has no memories of his father.

Our mountain guide Gerd Leitner grew up in the nearby village of Erhwald.  Gerd was a child on a picnic the day of the aerial dogfight.  He saw Sugar Baby get shot down.  Now 80 years old, Gerd is amazingly spry.  Often he had to wait for the rest of us to catch up as we made our way into the clouds.

Mountain climbing with the camera and lens in my backpack was a great workout!  But balance was critical.  If I lost my footing or fell backwards our shoot would be over.  Finally we reached the site.  I assembled the camera and started shooting.  It was a solemn time.  Our subjects told director Vicki Hughes about the sacrifices their fathers had made, and the terrible 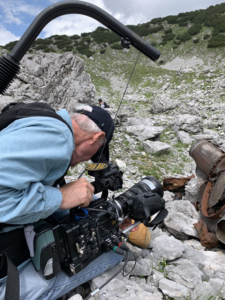 e cost of war.  I admit I was tempted to tuck a small piece of Sugar Baby in my kit to take home.  My brother’s an historian and I thought he’d love to have it.  But then I heard Jim say we were on hallowed ground.  He had seen pieces of Sugar Baby for sale on eBay, and that had really pissed him off.  So I left everything just as I’d found it.

The weather was cool -- and became cold when the wind picked up.  While we filmed clouds began to roll in. I was constantly adjusting the exposure and, after two hours of filming, Gerd said we should start down.  I wanted to keep shooting, but Gerd tapped my shoulder and made a look-over-there gesture.  I turned and saw a city-sized gray front moving in fast.  So yeah, time to go!

Getting down the mountain was harder than going up -- steep slopes covered with scree made footing tricky.  We used ski poles to help but, unlike going up, a slip meant a long tumble down.   I kept upright on my way down but I wondered how Robert Kurtz managed this descent.  Jim said it was even more amazing when you think that Robert made his way down with a piece of shrapnel in his leg.

Once he neared Erhwald Robert encountered a patrol of German soldiers.  He was knocked down, beaten and kicked.  It’s possible the Germans would’ve killed him then and there. With a shaking hand Robert reached into his tunic and took out the pink baby slipper.  At once the Germans stopped beating him.  They helped him to his feet.  When they took him to the train station the town’s people wanted to lynch Robert.  The soldiers protected him -- all because the baby slipper reminded them of their own humanity.

After our descent we took a quick break, then interviewed Gerd and Debbie Beson.  Her father was also in the Sugar Baby that day.  When the Germans 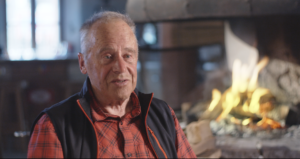 Our guide was 80 and often had to wait for us as we climbed the mountain.opened fire and the Sugar Baby started to go down everyone had to jump out.  But Debbie’s father Tony got tangled in his parachute straps. With only seconds to spare, Robert untangled Tony’s straps and they both made it out at the last possible moment. Not everyone on the Sugar Baby was so fortunate.  Debbie told Jim if it hadn’t been for Robert Kurtz, she would not be here today.

The Green Box Is a great story.  Jim wrote a book about it, from which our video gets its title.  When producer Holly Stadtler called to ask me if I was interested in filming in Austria and Poland, I jumped at the chance.  Then they sent me Jim’s book, which is well-written and meticulously researched.

The plane crash was only the beginning of Robert Kurtz’s problems.  He was taken to the infamous Stalag Luft III, where the Great Escape had happened just a few months before. Security was tight and food scarce.  Somehow Robert Kurtz would have to survive if he wanted to see his family again.