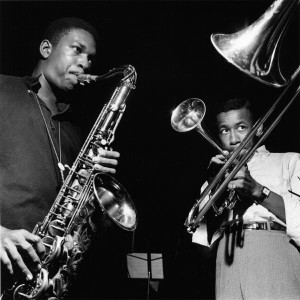 From Dixieland to Django to Miles and Monk, from Coltrane and Bill Evans to Herbie and Chick, I love it all.  As a kid I found a stack of 78s my dad had purchased. I heard Count Basie, Lester Young, Louis Armstrong, and even Big Bill Broonzy sing about movin’ to the outskirts of town.

Yeah, I listened to jazz as a child, a young adult, and right now while writing this blog. When I was writing DRINK THE TEA, I discovered something: that jazz and detective novels have a lot in common.

You could be reading “Hard Revolution,” a Derek Strange novel by George Pelecanos. Or Chandler’s “The Big Sleep.” Or Hammett or Willeford or Lawrence Block.

The “who” of what you’re reading doesn’t matter.

What matters is the “how.”

I’m talking about an American invention – the private eye story, and how it gets written.  Baltimore is the birthplace of Hammett, and also a lad named Poe. In 1841 Poe dreamed up the first private eye in his “Murders in the Rue Morgue.” Creating the first detective story is kind of like creating a new kind of musical instrument.

But the history doesn’t matter as much as the form, the delivery system. How do the books get written? And the form is jazz.   I’ve only been on book tours a short time, yet many folks seem interested in how I wrote DRINK THE TEA. The process. Did I use an outline? That gets asked a lot. And I always give the same answer — no.

I think outlines are great, I just stink at making them. And the writers I named above have written books without outlines.

How is that possible? Because telling a story is a way of thinking. And the more you do it, the better at it you get.

Now think about this: jazz is an American art form. For years it was our only music that didn’t stem from European traditions. And jazz is spontaneous.  Jazz is improv. Jazz is creation in real time. Jazz is extemporaneous.

And that is why I listed the writers above — these guys improv their way through the telling of their story.

Chandler freely admittedly that plot was not his strongest point. In THE BIG SLEEP he never names Owen Taylor’s killer. And Chandler gives all of us writers an invaluable tool: if a scene starts to drag, have a guy walk in holding a gun.

The great private eye writers improv their way through the telling of their story. And that’s why detective stories are a kind of jazz. Because jazz and the detective story are both American art forms, and both improvisational.

Now, in a song you have chord structure, harmonic melody.   These are like the rules of the song. And just as you need to know the rules of a playground to ave a good time there, the musician needs to know the limits. Even if s/he intends to overstep the limits, it’s good to know what they are.

A detective novel is part of the mystery genre. It too has rules. You break them at your peril.  What are the rules? Not that many. There’s a crime, perhaps a murder. The detective gathers clues and speaks to suspects. By the end the blame is placed on the guilty party.

There are endless variations, but those are the basic expectations of anyone who reads the genre. Like jazz, the detective novel is a fun place to play. It’s fun to make things up as you go along.

And it’s good to know the rules.