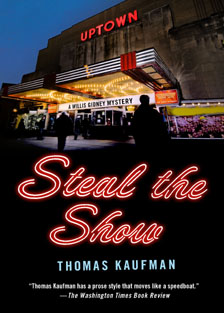 STEAL THE SHOW is the newest Willis Gidney mystery, set in Washington, DC.

Gidney needs money because he’s found a girl. No, no, not that kind of girl. This is an abandoned baby girl. Gidney found her on a case. So he hands the girl to the cops, right? Wrong, because Gidney started life the same way—abandoned. He knows all about D.C.’s juvenile-justice system, having barely survived it himself. That makes it hard to give up the girl. Too bad that unmarried private eyes aren’t usually thought of as ideal parents. So now Gidney needs a lawyer, and that means money.

Enter Rush Gemelli, a code-writing hacker who pays Gidney to commit a felony. Just a small one. Nothing serious, really, but you know how these things can snowball. Gidney thinks this is a onetime venture, but Gemelli has other ideas. He blackmails Gidney into joining up with his father, Chuck, the head of the motion picture lobby in D.C. And when Chuck’s former partner is murdered, it looks like someone may be playing Gidney for the fall guy. Add to that the unwanted attentions of a crazed actress, the D.C. case worker from hell, and the Vietnamese and Salvadoran gangs out to kill him, and it’s all Gidney can do to keep from getting his movie ticket punched–permanently.
[/one_half]